Welcome back to the second part of the article series The Skills of Netrunner! This time we will be looking at a topic I’ve been thinking about for a long time, and that I feel is rarely discussed in detail.

I continually see players who want to improve fall into familiar psychological traps, such as blaming luck, and in doing so making it much harder to get better. As soon as you attribute outcome to anything other than yourself, like luck or your deck, you cripple your ability to see where you can improve, because you are externalizing. You are also losing critical information that will actually help you get better. I will aim this article at players at any level who want to improve at winning games, mainly in tournaments. Note that this does not mean new players only, I believe there are lessons in here for most players, especially some of you who try so hard to compete and win so that you are forgetting to have fun doing it!

Burnout is a thing, and I believe that many times this comes from warping your mind-set away from what made you enjoy the game in the first place. The point here is that to get better (or stay on top) you will have to be able to accept setbacks without wasting energy on blaming yourself. That energy is better used for analysing mistakes. What makes you gain energy is having fun doing this; if you are too hard on yourself you simultaneously sap your energy to stay in the game.

I will go through how to do this, or rather how I think I do it.

Before even reading further, I urge you to ask yourself a question, and I expect you to be honest with yourself. Why do you play this game?

The reason for asking is simple. Do what you enjoy doing in the game. This game can be played in a multitude of ways, and I’ve met people in all categories. No-one has the ‘correct’ reason to play, and the reasons you play will give you the most enjoyment. You should not try to build decks if you don’t like it, you should not feel a pressure to be ‘competitive’ unless you want to.

While I will deal with getting better at the game, and by that I mean winning more games, I don’t think this is the main reason everyone plays. It’s certainly not my only reason. I love the mechanics, I love the personal interaction. I believe Netrunner is one of the most impressive designs in an era of great games, and I want to reward the designers for creating it. I want to follow in its trail and see where it leads.

The Tenets of Improvement

Now, if you found that at least some of the reason you play is to win games, please read on. You will have to realize a few things first, about being in a state of mind appropriate to improving long-term.

Now read those three points again. Before we go on, make sure you think about each one and let them sink in.

When in this state of mind I believe it is easier and more effective to concentrate on improving. It is also way more fun to play if you concentrate on the long run, and see single games as ways of trying out different things, learning to fight from behind, playing decks you’re not familiar with and adding knowledge to your growing experience.

Now let’s get into some new concepts that will help you apply these lessons efficiently. First, you will have three mental states in which you play Netrunner. You can switch freely between these as you wish, but each has a different objective. Before we get to all that however, we need to look at energy.

Playing well requires concentration. Concentration requires energy. This is not a fluffy philosophical concept, this is what science says about how the human mind works. The phenomenon of lack of energy is called ‘ego depletion’ and I will quote Wikipedia:

I believe this is the reason for burnout; this is the reason for frustration and lack of performance. It is also the reason why having fun is as important as winning. To be able to get better, like with anything, you will concentrate. This will sap your energy, especially if you care about every single game outcome. The key to improving and enjoying the game at the same time is to focus your energy where it is needed, to switch to different states of mind with different goals. This makes sure you can adapt to the situation and maintain your energy-levels to spend on important things.

Energy is your fuel, and if you try to run on an empty tank you will experience burnout. This means you have been pressuring yourself too hard, or that you have forgotten to regenerate energy. The way to regenerate energy differs among players, but go back to my question in the section above and look at the things you listed that made you enjoy the game. This is where you will find your source of energy.

This means also that you need to know how to switch, what is important and not at any given moment. This is about wisely spending your energy and is what we will be discussing next.

While in the learning state of mind your objective should be to concentrate on learning and experimentation. You should play to win, and take matches seriously, but not be afraid to try different strategies for the purpose of learning. In this state you aim to maximize your learning, not your win-percentage.

Feel free to think about your moves, what would have happened if you took another route, what you are going to try in the next matchup and so on. It is only beneficial to you and your opponent if your time is well spent, thus if you both see a match going to end a certain way, stop. Play again. If your opponent made a dumb mistake, let them take it back, note it and move on.

Think of this as sharpening your sword.

“It is better to conquer yourself than to win a thousand battles. Then the victory is yours. It cannot be taken from you.”  – the Buddha

In the proving state you either simulate a tournament match, or play in a tournament. In this state your sole objective is to win each match, or maximize your probability of winning. This means that you should apply all that you have learnt, but there is no time to learn new things. Your whole being is concentrated on playing and analysing; if you have energy left over you should concentrate on analysing your opponent instead.

This also means that you play in the now. Anything that happened in the past is irrelevant to the future. This includes worrying about past matches, past mistakes, how your friends are doing et cetera. Feel free to note any mistakes you make, but do not dwell on them. You will make mistakes. Forgive yourself and move on.

Think of this as wielding your sword.

“Do not dwell in the past, do not dream of the future, concentrate your mind on the present moment.” – the Buddha

In the casual state your objective is having fun, gaining energy and enjoying the game. What separates the casual state from the other two states is that it does not require concentration from you. Whether you win or lose or make ‘mistakes’ towards that goal is less relevant. What makes this state important is that you are regenerating, either by the social aspect, interesting interactions, card banter or other things that gain you the energy back.

A good number of players prefer this stage to the others the majority of the time, Do what you enjoy, what brought you here in the first place.

Think of this as having sheathed your sword.

“There is no path to happiness, happiness is the path.” – the Buddha

This is the place to mention the concepts of tilt and the more neutral ‘mood’ and how it affects your play. What is called tilt by players is taken from poker:

Tilt is a poker term for a state of mental or emotional confusion or frustration in which a player adopts a less then optimal strategy, usually resulting in the player becoming over-aggressive. This term is closely associated with steam and some consider the terms equivalent, but ‘steam’ typically carries more anger and intensity.

You may have experienced this. This is especially common in tournaments, or when events in a game go against a player’s perception. It is closely correlated with competitiveness and a will to win. I believe that tilt stems mainly from a player focusing on the result of a single game as a measure of more than that, as a measure of their skill as a player. I also believe one is more vulnerable to tilt in a low-energy state. You might not have slept well, you might be hungry or irritated at a previous, completely unrelated event.

I believe that the way around this is mainly to be proactive with maintaining energy-level by sleeping well, eating well and having fun. I also believe that being in the appropriate state of mind will prevent tilt.

Further, looking back at the four skills, I believe that the more towards the variance-end the easier a skill has to be affected by mood. The skills of efficiency and strategy are less vulnerable, since they have large degree of pre-learning to them. The skills of tactics and especially Yomi are way more vulnerable to being disrupted by tilt. This is because they depend on taking in and processing more information in the moment, and tilt can really make your opponent able to easily out-Yomi you. 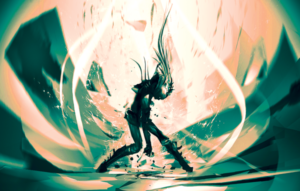 Never try to tilt an anarch.

Your mind is a curious thing, and you have to be aware of what is actually affecting it and how. What is going on at a given moment. You should be aware of what mental state you are currently in to be able to improve and play well. If you are feeling sapped of energy, do not try to play practice games. Play for fun instead!

We will go more into detail on the two states of Learning and Proving in articles four and five. I trust that you know yourself well enough that you can find your Casual state on your own!

In the next article, however, we will look at deck types and how to choose the correct weapon for you.