The Japanese of Jinteki 2.0 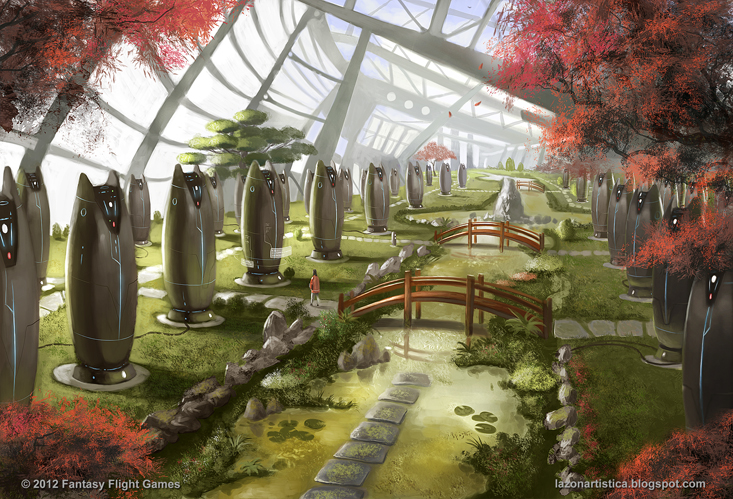 A couple of years ago I wrote an article talking about what the Japanese in Honor and Profit cards means (The Japanese of Jinteki).  I got a few things wrong but at least the worst was corrected.  In general though, people seemed to like it and I have heard a marked improvement in the pronunciation of card names on podcasts.  In light of this, I would like to share the translations of the other Jinteki cards with Japanese names.  Some of these seem very obvious to me, but I don’t know if that holds true for everyone so I’ll go ahead and say what a katana is.

Before we start, I have to remind everyone of the pronunciation rules.  Consonants are what you expect.  There are only five vowels and they are pronounced as follows:

And O is the ‘oh’ in ‘oh I should have seen that coming.’

Last time I didn’t include anything about long vowels but it kind of applies to a couple of cards.

EI is just a longer E.

OU is just a longer O.

They aren’t a lot longer, just the littlest bit.  I don’t expect anyone who doesn’t hear a lot of Japanese to hear the difference between Hyoubu and Hyobu or Sensei and Sense but nobody needs to pronounce Hyoubu ‘hyo-u-bu’. 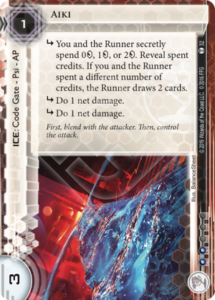 Yes, we’re going in alphabetical order.  Aiki is a really good thematic one.  The characters mean ‘merge energy’ and that is the central purpose of aikido, the martial art.  I saw an aikido demonstration once and the thing I remember most clearly is that the student tried to punch this master guy and he ended up being evaded and placed, almost gently, on his back on the ground.  The master was using the momentum of the punch to do that.  That’s aiki. 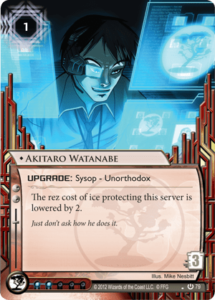 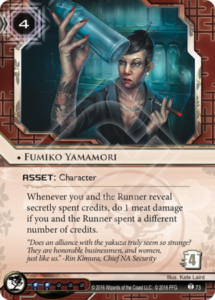 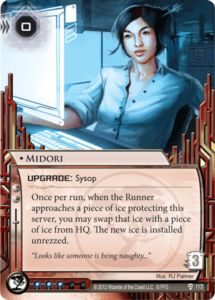 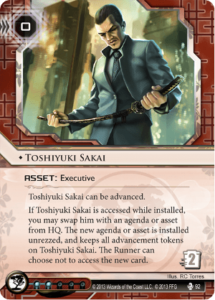 I’m just going to get all of these out of the way at once.  They’re names.  I’m sure whoever named these cards picked the names for some reason, but I’m not going into it.  They might be characters, famous people, or just people who the designers knew who had these names.  I can’t at a glance tell who they’re referring to so I’m just going to ignore them.  Midori means green but it’s also just a cute name.  That’s all I’ve got. 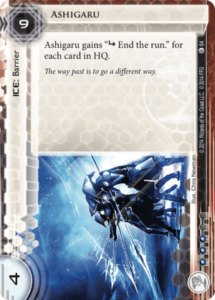 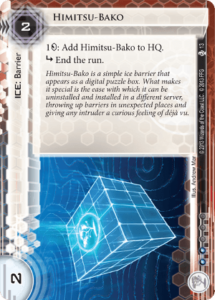 I initially read this as ‘secret box’.  Apparently there is a thing called a puzzle box though, and this is it.  I guess it’s a box that doesn’t open in a straightforward manner, ie. taking off the top.  You have to twist the top ninety degrees to the right, pull up, 180 degrees to the left, push down, and slide it off to one side.  Some stuff like that.  I’ve never seen one.  It sounds fun in theory but an unnecessary pain in the ass in practice.  Anyway, it’s a thing. 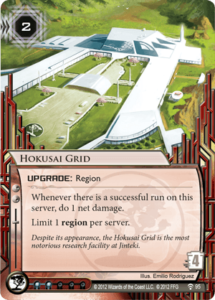 There is a very famous Japanese painting of a big wave.  There is a meme in which it is turned into Cookie Monster. 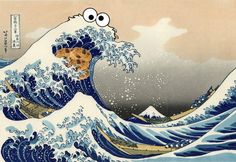 That artist is Hokusai.  The wave, not the cookie monster adaptation.  He also did a lot of other lovely Mt. Fuji paintings and prints.  He’s probably the most famous Japanese artist.  Why his name is tied to an upgrade that hurts people for looking at things is beyond me, but the art on the card is pretty so in one sense it makes sense. 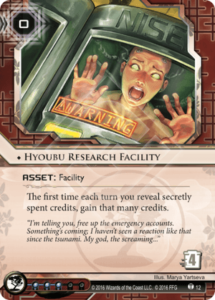 The characters mean ‘soldier club’ or ‘soldier section’.  That means ‘ministry of war’.  This was around for hundreds of years as the pre-modern Japanese ministry of war.  I don’t know if there’s a thematic connection they were going for or if it was just a cool thing to call a card.  Last time I wrote an article like this I said something might have been landed on just because it was a cool thing to call a card and I didn’t realize there was a much more appropriate definition that they were obviously using.  So maybe it’s something else. 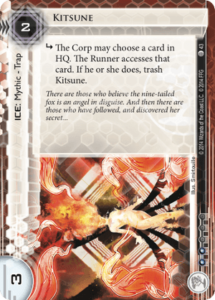 This means ‘fox’, and in Japanese mythology the fox is a very tricky character.  In fact, the role that it fills is the trickster that is found in mythology the world over, from Anansi in Africa to Coyote in Native America.  These characters fool others, sometimes seeming cruel, but aren’t villains.  They’re more rebellious antiheroes.  The fox in Japan can also be seen as a lucky animal.  Between these two traits, luck and trickery, I think the theme is spot on.  But what’s with the naked fire chick in the art? 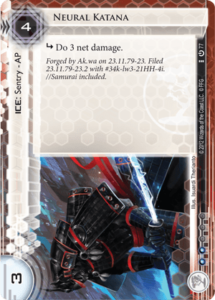 Ok, I think everyone knows this one.  A katana is the single-edged sword samurai used.  No need to belabor this. 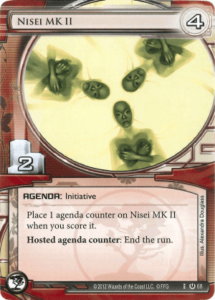 As I said in my first article in reference to Nisei Division, nisei means ‘second generation’.  As I also mentioned, it can also mean imitation, which fits very well with the Jinteki cloning thing.  Jinteki itself is a cloning pun as well.  Anyway, I think they thought it’d be fun to give it the mark two so it’s ‘second generation mark two.’ 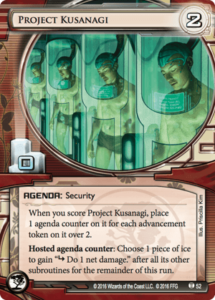 The characters mean ‘grass cutter’.  This is the badass legendary sword of Japanese mythology.  It was found by Susano no Mikoto in the tail of Orochi.  It’s part of the imperial sacred items that probably don’t exist.  Think Excalibur.  It’s also the name of the protagonist of ‘Ghost in the Shell’, one of the classic cyberpunk films.  I’m sure in that movie they were referring to the sword, but I’m sure in Netrunner they’re referring to both. 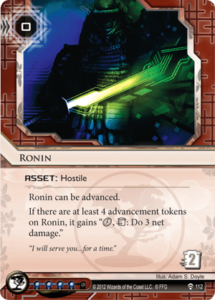 A ronin is a masterless samurai.  The characters mean ‘wandering person’.  The most famous ronin is probably Miyamoto Musashi, but more on him later. 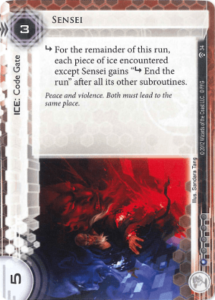 Sensei means master.  It’s often a title used for teachers, but you could use it for artists and other valuable people as well. 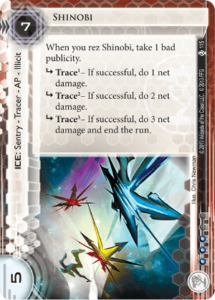 This is the old original word for a ninja.  Ninja as a word hasn’t been around until the modern era.  The character means ‘secret’ but it’s short for ‘secret doing person’.  We all know what ninjas are. 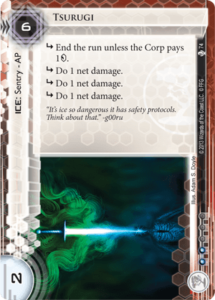 A tsurugi is a type of sword.  Whereas the katana is a single edged sword, the tsurugi is an older, double edged sword.  It’s possible that this card was named tsurugi because if you want it to fire you have to pay, making it a bit of a double edged sword for the corp.  Probably not though; just over thinking it.  Kusanagi, that legendary sword I mentioned earlier, is a tsurugi. 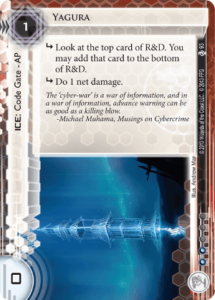 A yagura is a tower on a castle.  It means ‘arrow storehouse’, which makes sense.  In Japanese castles these are usually not high towers like in Western castles.  They are more buildings to offer archers protection on top of the ramparts.  As I mentioned in my previous article, shiro means castle, so it’s awesome that the effect of tower is like a smaller version of castle. 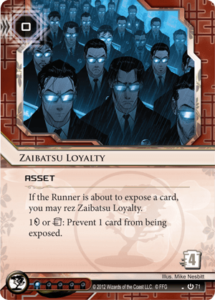 So in the late 19th century there was the Meiji Restoration, when there was pretty much a revolution against the shogun, the reinstitution of the emperor, and a period of rapid modernization.  This rapid modernization took the form of an industrial revolution on a massive scale and was probably miserably inhumane.  This industrial revolution was run by what were essentially semi-modern megacorps called zaibatsu.  After the war, these corporations were broken up and the zaibatsu system ended.  The theme of this card is just excellent for a cyberpunk Japanese corporation. 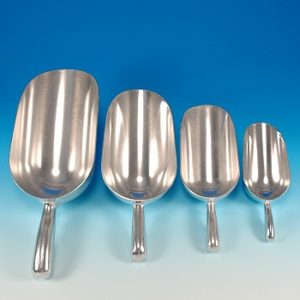 In this context, the characters mean ‘cards spoiled at worlds’.  In Japanese it is スクープ or sukuupu.  If for some reason you don’t want to see anything about spoiled cards, read no further. 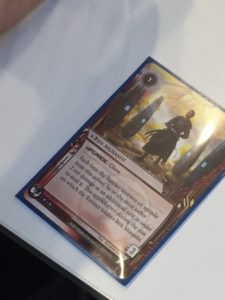 Ok, so if you don’t know anything about Miyamoto Musashi you have been missing out.  He was a very famous ronin and a peerless duelist.  This guy wrote the Book of Five Rings, which is about zen and swordsmanship and is read by businessmen, historians, and nerds the world over.  He wandered around Japan working for various lords during the feudal era.  If you like reading exciting books dramatizing awesome historical figures, you will love a book called ‘Musashi’ by Eiji Yoshikawa.  It’s fairly long but the stories of his battles, loves, rivalries, and loyalties make up the best picture of feudal Japan that I’ve ever read.  But ‘Ben’? 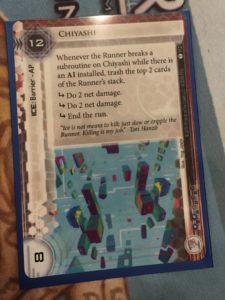 Before the Yamato people came to Japan, it was the domain of a people called the Ainu, who now only live in the most northern prefecture.  This was a consequence of the Yamato people coming to Japan.  The Ainu had forts that were called Chiyashi.  The word is pretty esoteric, but since it’s a fort and the card is ice, I figure that definition is probably what they had in mind. 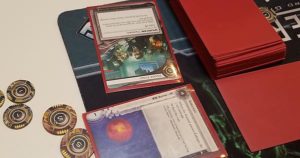 The characters mean ‘readiness’.  Not much to say about that except that while it’s installed it will always do damage.  Maybe that consistency is why they called it readiness.  Of all of my definitions, I’d guess I’ll get corrected on this one.  Last time, when I thought there was no reason they called a card something it was because I was thinking about the wrong translation.  If any of my translations this time seem dubious to readers who know Japanese better than I do, definitely comment about it.

(To better clarify, jared1309 on the forum added the following:  “Kakugo is mental preparedness, determination or resolution. So readiness is not incorrect, but it might not adequately convey the state of being ready (or not) to go through with or endure something.”  Thanks Jared.)

Another simple one.  This is how ‘mirage’ is rendered in katakana, the script that is used for foreign words.  The effect on the card fits the name so well. 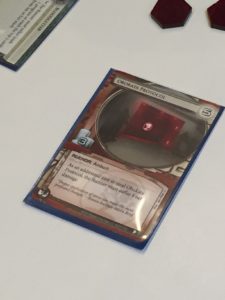 Someone in slack pointed out to me that Obokata is the name of that biologist who falsified stem cell research.  Her mentor killed himself afterwards and at the time some people were saying maybe it was shame or maybe he shared the blame.  If you read the flavortext with that in mind, it might have a connection.  Plus the biology connection.  Or maybe Damon dated Jane Obokata in college.  Who knows?

Well that’s all of the Japanese on Jinteki cards that I could find.  If I missed anything or if I got anything wrong, please post and let me know.  Thanks for reading.