The Japanese of Jinteki Today’s article is something a little different than usual. This is a guest article from thopol that will explain the meaning behind the Japanese names and themes of many of the Honor and Profit cards.

With Honor and Profit released, everyone has been talking about Jinteki. In this discussion, many people are wary of Japanese pronunciation, and most players don’t know what any of it means. Some of the Japanese names are extremely thematic and I thought it was a shame that everyone can’t appreciate that. I wished to correct this issue and StimHack has kindly agreed to let me.

I’ll preface by saying that I’m not Japanese and I’m not totally fluent, but I have lived here for a few years and I study a lot. I’m quite confident in my definitions, but if anyone thinks a different interpretation might be better, post a comment.

Some of the Japanese in Jinteki cards is a little strange. Much of it is not often used and some is downright esoteric. Sometimes a word has a normal meaning but doesn’t make sense in the context of Netrunner. For example, it’s doubtful “Nisei” would be defined as Jr. as in Martin Luther King Jr., but that’s the way it’s most commonly used. I’m going for the definitions that are probably what FFG intended, not necessarily the most common usages.

In terms of pronunciation, Japanese is very easy. The consonants are all as you would expect and there are only five vowel sounds.

With that out of the way, let’s get started:

Jinteki: This means human. It can be both an adjective or a noun, so it gives ‘The Jinteki Corporation’ a double meaning. Also, it is written with the characters for ‘person’ and for ‘goal’. Nisei Division: Nisei literally means second generation. It also means imitation. Since Jinteki is all about cloning, both imitation and next generation are relevant.

Tennin Institute: Tennin can mean either ‘heaven and human’ or ‘heavenly human’. Again with the cloning. 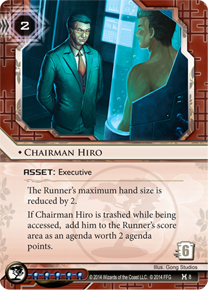 Chairman Hiro: Hiro is just a common name. This one might be a reference to the protagonist of my favorite cyberpunk book, Snow Crash by Neil Stevenson. 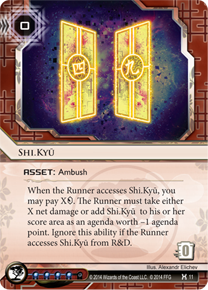 Shi.Kyu: This literally means four nine. Where thirteen is an unlucky number in the West, four and nine are unlucky numbers in Japan. This is because their pronunciation is the same as words for death and suffering, respectively. This is wonderfully thematic. Death or suffering, pick your door. (The writing on the doors is four and nine) 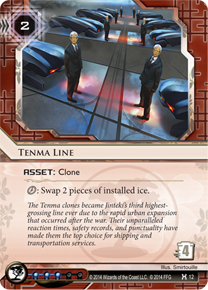 Tenma Line: Tenma is a Buddhist devil. I don’t see much of a thematic connection, so perhaps they just thought it sounded cool.
[Editor Note: Readers have added that another possible interpretation of Tenma is “Pegasus” or “Flying horse”. This is potentially more appropriate for clones used for transportation purposes.] 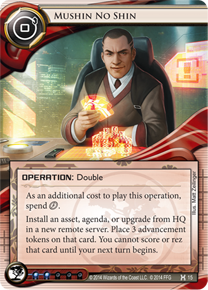 Mushin No Shin: This means literally “mind of no mind”, referring to a mind unclouded with conscious thought. This notion is very important in Zen philosophy. The idea is that through disciplined practice, one will come to do something naturally without thought or concern. This is very thematic if you consider how installing and advancing consistently and naturally will prevent you from giving anything away. 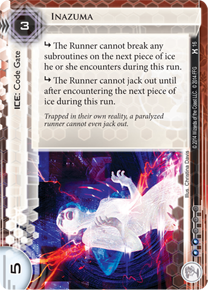 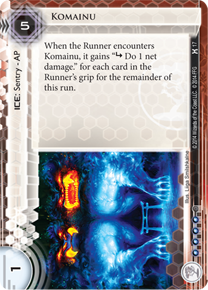 Komainu: In Japanese ai is often pronounced as a diphthong, but in this case the sounds are discrete. A komainu is a stone lion-dog that you see in front of shrines. (That’s the shrine gate behind in the picture.) 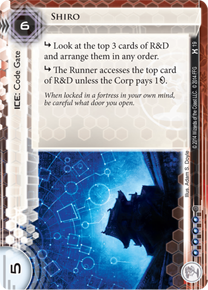 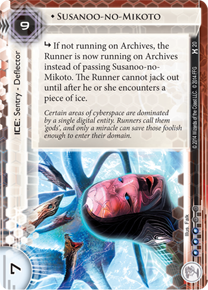 Susanoo-no-Mikoto: Susanoo is the god of storms and the sea. I know him best from the narrative that at Izumo, he battled an 8-headed serpent called Yamata no Orochi (which means 8-headed serpent). He is a god in the pre-modern mold, blending heroics and dubious actions. Think of him like Poseidon of Greek myth.

Tori Hanzo: She is named after one of the most famous samurai of the Sengoku period, Hattori Hanzo. He was known for being ruthless as well.

So that wraps up all of the Japanese in Honor and Profit. I hope that understanding it adds to your enjoyment of that amazing box of cards.

Thanks to thopol for the interesting new perspective on Honor and Profit. If you would like to see more articles like this, let us know in our forums!