The esteemed content producers of the Android: Netrunner community have, for some time now, blessed us with honest articles, podcasts, and videos about everything from card reviews to tournament recaps with such consistency and detail that you may still be working to process when Sandburg’s time is actually coming. Those exhausted by the avant-garde works of Seedy Location, the underground illicit content of the [redacted]cast, or from repeatedly refreshing fetal.ai’s webpage in hopes the creator will return from tweeting images of the children’s show Arthur will be glad to know Stimhack is now producing an alternative form of content. Missing from the Android: Netrunner catalog of community content is an irresponsible use of a respectable platform to create content that is in no way thought-provoking to drive clicks. If you’ve been seeking an outlet for content tangentially related to Netrunner because the world champion giving you nuanced opinions about competitive Netrunner on a consistent basis in the form of a well produced podcast is a bit more than we asked for or deserve, we are here to cater to your vapid tendencies. We will be Test Running a column for such useless information in the form of Power Rankings, an original term we thought of ourselves. If you like it, we just may Scavenge it.

First, what I promise to be the most directly Netrunner related and thus least interesting list, is from author, deckbuilder, and player TheBigBoy. TheBigBoy started his blog shortly after the 2015 regional season, which is not coincidentally the height of player turnout in the USA. His crowning Netrunner achievement is being the only compelling link we have to player turnover. His list is first today only because I am certain if I opened with some of the others, there is simply no chance that you would not have closed this tab in your browser and filed a complaint about this content.

I don’t doubt you have some thoughts about this list, but I’m going to refrain from commenting on it, because, frankly, that is way more talking about Netrunner than I am comfortable with in this column.

Next, from Inniscor, a San Diego Netrunner most famous for relentlessly complaining that Netrunner is dead is a list for both petty Netrunner argument connoisseurs and new players who are wondering why people are talking about playing 100 games of Stronger Together. For our newer readers, Gustavo and I have decided to take direct quotes or screenshots so navigating a Netrunner tournament involves less standing as two people recite inscrutable memes that, best you can tell, could not have ever been about anything important.

Top 8 Cards That Will Make You Say “What was Damon thinking?” and Then He’ll Tell You on Facebook Power Rankings

As we continue down the stretch of increasingly less Netrunner related content, our next list, courtesy of SimonMoon, is about a television show I do not understand and would not recommend you, or anyone watch. It is his favorite show, Pretty Little Liars, which he insisted I watch an episode of.

In the pilot episode I watched, one of the girls commits shoplifting on screen and is caught on camera for an understandable crime and believable situation. “Just pay the fine,” I said casually. She’s brought to the station, where the situation appears to weirdly escalate. “Just pay the fine,” I repeated, confused this plot was continuing. Shortly after, I am subjected to a shot of her mother dragging the police detective upstairs as she makes stern, guilt inducing eye contact with her daughter. “JUST PAY THE FINE,” I screamed at my television, questioning why I’ve associated with or opened my column to someone who recommended this show to me.

Anyway, this column suits such quality of content, so I present a list by SimonMoon, whose Netrunner claim to fame is that he was cut from day 2 of Worlds 2017 despite having a record good enough to make the top 16 cut if he had a perfect second day. He was cut because he was far enough down the list that he did not fit on the first two pages of standings, which is what FFG considers conclusive day 2 material. Thus, unlike 15 of the top 16 players, he has not technically rightfully lost the tournament yet. His list and reflections will obviously be written entirely by him. His list is also descending because he thinks you care about the suspense of the reveal, when really, you didn’t know this show existed until just a moment ago. 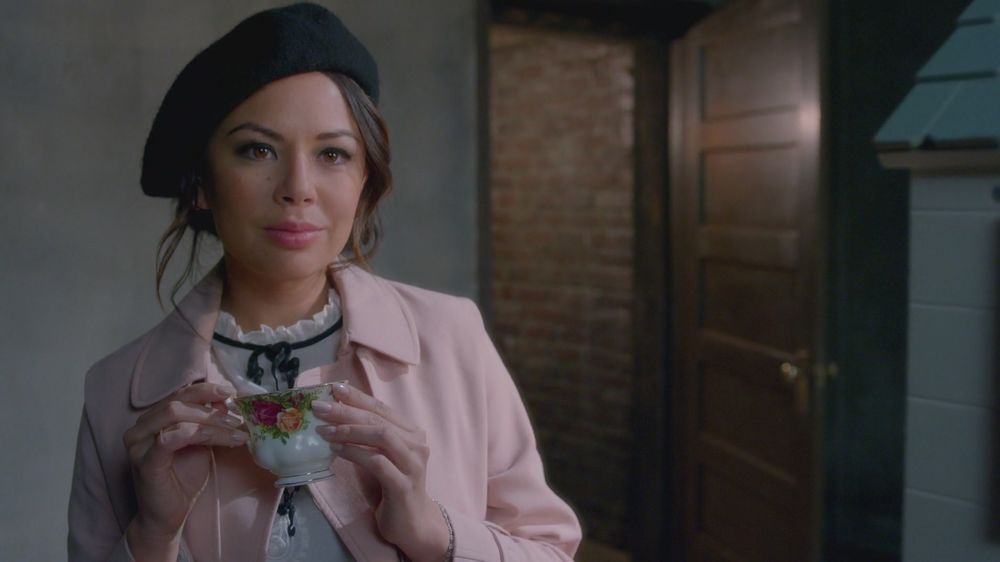 Spoilers incoming, but Mona is definitively the best character in Pretty Little Liars (one of two characters to be a ghost at some point, and one of 30 characters to be apparently murdered and still be alive). She is smart, funny and every time she showed up on the screen it would remind me why I’ve actually seen 6 seasons of this show. She’s also one of many people to be A at some point and is far the best at it, torturing the Liars for all the things they should be guilty for. Also, her outfits are pretty good. It is a travesty that Lucy Hale has to be in Truth or Dare while Janel Parrish remains an underutilized piece on this long running sitcom.

To close today’s column, we have a list from Grogboxer, most well known in Netrunner for having the record of most consecutive cuts made in Netrunner swag tournaments. Now, you have stuck with this useless column this long, so please do not close the browser when I inform you that this next list is about the NBA. The NBA playoffs are very near, and if you’re looking for just a little bit of ammunition to saunter over to the water cooler to astound your coworkers with knowledge that seems pretty on point, even though you are just speaking about the Washington Wizards precisely as if they were an Adam deck, then I can guarantee this column is the only assistance you’ll receive. Alternatively, if you just want some quick context on NBA teams, I’m breaking Grogboxer’s list down in Netrunner terms which is definitely faster than googling them yourself.

This concludes this Test Run of Stimhack Power Rankings. Like it? I’m surprised. Hated it? I’m certain you will let me know. Disagree? Continue the discussion and submit your own Power Rankings on the Stimhack forums, but be aware, these Power Rankings are official and we already published them, so you’re definitely wrong.