This is part two of an article focused on helping experienced Android: Netrunner players teach the game to new players.
You can find part one in this series here: http://stimhack.com/teaching-netrunner-part-1/

This part is written just prior to the release of the True Colors datapack in the Spin Cycle. In this part of the article, I will give two teaching decklists–one for each side–that I recommend playing with when introducing a new player. When creating a deck to teach Netrunner, we should keep deck goals in mind. Unlike with most other Netrunner decks, the goal of these decks is not victory; however, that doesn’t mean we should abandon viability. We want both decks to be able to win, but the focus is more on teaching the game.

In order to teach Netrunner basics, we should play with cards that exemplify basic functionality. For example, Diesel has a very simple, but useful effect: draw 3 cards. Any new player can intuitively understand exactly what diesel does. Likewise, Sure Gamble is another good, simple card. We want as many simple, yet viable, cards as possible. 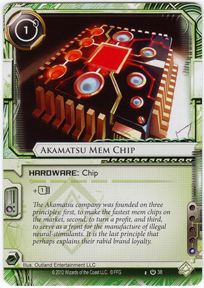 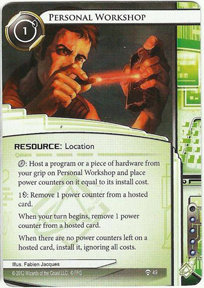 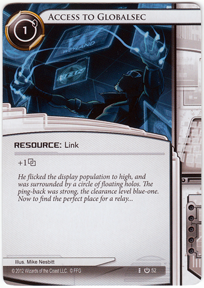 In addition to simple cards, we want cards that make the game simpler. Cards like Infiltration reveal more information which can help a new player understand the Corp better while playing as the runner. Familiarity breeds understanding, so it would be best to include three copies each of appropriate cards. Every drawn card is a potential barrier to understanding, but by including plenty of duplicates, we can turn that barrier into an opportunity for recognition and retention. This is also the reason why I avoided Quality Time in this deck–while it is a simple card, it overwhelms the runner with significant new information all at once and can lead to a new player not knowing what to do afterwards.

Kate is a great identity for new players because her ability is dependent on the type of card played. A new player looking to see if their newly installed card is a piece of hardware or program (as opposed to a resource or operation) learns more about the types of cards and their effects. Also, Kate’s ability is not antagonistic like Reina’s rez cost increase, but helpful.

Icebreakers should be a main teaching focus. This deck includes more icebreakers than usual for a couple reasons. First, I’ve excluded search cards because new players won’t know what to search for. Also, it’s no fun to play without seeing your breakers. Using Corroder as a baseline, you can compare and contrast Ninja, Gordian Blade and Crypsis. I usually start by explaining how Gordian Blade costs more to install, but its strength lasts for the whole run. Ninja is more efficient, but might end up costing you more. Crypsis can break any ice, but is expensive in both clicks and credits.

It’s important that new players have fun so we should avoid making them feel helpless or overwhelmed. One way to prevent this is an abundant economy–it’s no fun being broke. Magnum Opus is both simple and a reliable economy card; it essentially doubles the runner’s normal click for 1 credit action. Between Magnum Opus and Icebreakers, you should be able to explain how actions and paid abilities work and the difference between them (something even veteran players can get wrong!). We don’t want to overwhelm the runner with too many abilities and things to keep track of, so I’ve limited beginning-of-turn effects to Daily Casts and activated abilities to icebreakers. I’ve also included a sampling of some other types of cards such as Run Events (Dirty Laundry, The Maker’s Eye), Resources (Borrowed Satellite), and hardware (R&D and HQ Interfaces, The Toolbox).

The goals for a learning Corp deck should include an understanding of card type and victory condition. I’ve left upgrades out of the deck so new players can put more focus on more common cards, namely agendas. The varied distribution and effects of agendas in the deck should help teach a new player how different agendas can be. Feel free to note that while Government Contracts will usually take a couple turns to score, Hostile Takeover can be scored out of hand. While the deck isn’t focused on flatlining the runner, Private Security Force provides the option and shows how damage works. Hostile Takeover introduces Bad Publicity for the new player to learn about. 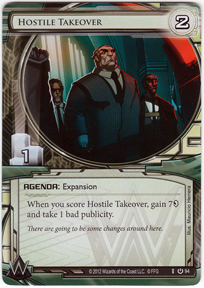 When you score Amicable Takeover, gain 5 credits and a hug.

Next to Agendas, ICE is of utmost importance. Since this is a learning deck, I’ve included plenty of ice of all types and varied abilities. Most of the ice ends the run because this is the simplest way to protect servers. However, I’ve included ice such as Shadow and Hunter to prevent the common assumption that all ice ends the run. These ice also provide the ability to tag the runner, enabling resource destruction and Private Security Force.

Since new players can hardly be expected to know what neural katana or archer can do, it’s best to play a few games without particularly punishing ice. On the other hand, it wouldn’t be good for a new player to learn the game thinking that running is risk-free. For this reason, a couple Rototurrets should encourage the runner to get a sentry breaker out, especially with the Rototurrets’ low strength. Risk adds more fun into the game, especially when it isn’t completely reliant upon chance.

Operations contribute the bulk of the economy and also make the core Weyland ID a great choice for a learning deck. It’s easy to explain the bonus credit and it will always be useful, unlike more situational abilities. Just like the runner deck, we want the corp deck to have plenty of money to spend. With all the operation economy, economy agendas, and other economy cards, the corp should never be in want of money. 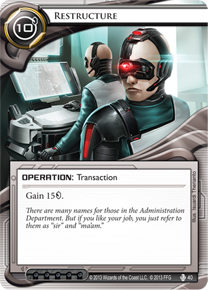 “Making bank” is irrelevant when you own the bank.

I hope these decks and my advice help you share Netrunner with new people. Good luck and let me know in the forums  if there is anything you would add!