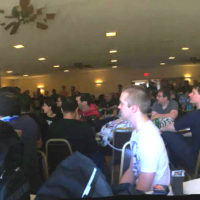 Warning – everything in this report is either the truth or a lie.  Written for posterity, to answer questions, but mostly for laughs.  Told in bullet points in honor of Josh.0’s Codenames fail (not his…

With an exceptionally strong competitive Netrunner scene, Ottawa is finally graced with their very own Regional event! A mid-point between Toronto and Montréal, the capital attracts contenders from all across the north-east. After five rounds of Swiss, and an exciting top eight, two friends are left at the final table: Ottawa’s Alex Bradley and his tag punishment SYNC, against Dien Tran and his no-nonsense Valencia. Will Alex be able to tag out the nosy Anarch, or will Dien be able to blackmail his way to a second game?

Luke Golden (Whizzard) and Gabriel Rosauro (SYNC) face off in Round 5 Game 2 of the Giga-bites Cafe Netrunner Store Championship in Marietta, GA on February 28th, 2016. The latest legal Netrunner set at this tournament was Kala Ghoda, and the MWL v3.0.2 was in effect.

This is a recording from a livestream, with commentary provided by Aaron Konnick and Josh Brzinski, and production by Ben Torell. For more Netrunner livestreams, follow on Twitch at http://twitch.tv/dodgepong

With the new tournament rules freshly in place (3.0.2), the crew from Montréal piles into a fleet of cars and drives on down to Gatineau to get their first taste of post-Most Wanted List action. The stiff competition from the Ottawa region seems irrelevant as two Montréalers, Vincent and Andrej, face off in their first game of the day. Can tag-me MaxX hold her own against a very fast tag-you SYNC?

In the continuation of Montréal’s fascination with NBN’s new orbital network, Jerome throws his ‘Convenience Shop’ SYNC deck against Julien’s aggressive Noise. The two skilled players trade police chases with trashed cards and bleeding wallets, all in a mad rush to grab those breaking news stories. Hold on to your hats, because this is a fast one!

MaxX barrels through her apartment door. A tin of YucaBean. Uniform off. Plugged in. Online. Music up, and loud. Good. NBN had been busy, or so she heard. A new orbital network was launched, largest in the system. Zettabytes of traffic. Liked the challenge. MaxX jacked in, narrowing her sights on the nearest relay. A messaged leaped from her rig: she had been located. They knew where she was. MaxX smirked. Good. “Come find me,” she muttered, not fully knowing what she was about to begin.

Data and Destiny is out and upon us here in Montréal! On the corp side, the brand new deluxe expansion happily brings oh so many new tricks and tools to our favourite information company, NBN. Can the aggressive running of the Anarch e-thlete Whizzard do substantial damage to SYNC, NBN’s new orbital data network, boasting the largest thoroughfare ‎of information this side of the moon? Or will the Whiz simply end up tagged, and preyed on by clever ‘marketing’? After months of bated breath, we are finally ready to see how this little blue box will shake up the meta. And what a way to start!