Analyzing the Metagame, the Valley Shifts

Hey guys! Coming soon will be the Store Championships Invitational. This will be the first major tournament with Clot legal. Clot will majorly shape the game going forward and this article should help prepare for the upcoming environment.

To that sadly I have to give a resounding no. Clot is crushingly good vs NBN, and Cyberdex Virus Suite, Shipment from Sansan, Power Shutdown, and Trick of Light are all not nearly enough to combat the menace that is Clot. If your opponent is playing Clot the basic strategy for NBN is to get rekt.

Question 2: Should we play Clot?

Believe it or not the answer to that question is also no. Clot is super strong vs NBN and all fast advance, but if your opponent doesn’t play those cards then clot is a wasted deck space. Here’s the crazy part, as the power level of narrow hate cards rises against a particular archetype the probability you should play them goes down! The fear that you might play the hate card provides a significant disincentive for the opponent to get hated out.

To illustrate watch this video:

So What Can We Play?

This analysis will be focused more on individual cards rather than decks, mostly because those cards represent the archetypes they will be going into and show interesting trends.
Corp Card Analysis 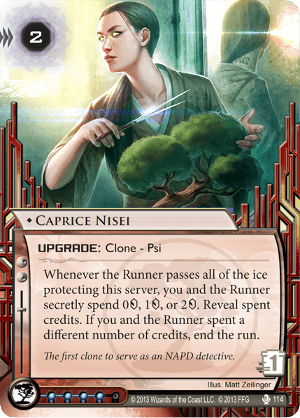 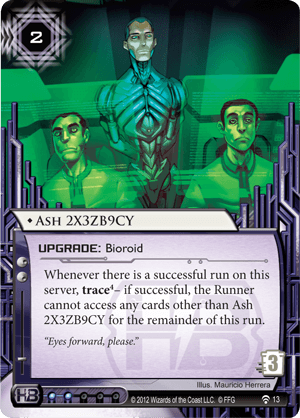 Caprice Nisei: The elephant in the room

if I were a magic columnist I would be predicting that Caprice would be a $25 rare or $80 mythic by the end of the month. Be prepared for psi games as this card will be everywhere; obviously all jinteki decks can play 3, but HB can play 2 and an archived memories or even the full 3 on the splash. Blue sun also can afford to play 1 or 2 on the splash with interns but can’t go the full 3. This card is one of the few ways the corp can win the game while still being economically behind the runner, which is a pretty significant deal given that the primary method before (fast advance) is now dead. Caprice is a great splash though it does require 4 influence and needs to be protected by a pretty decently sized tower, it is the greatest card in rush AND glacier. Rush can use caprice to win lategames that they otherwise were dead in, and Glacier can use caprice to defend itself from early onslaughts and win the endgame.

Ash 2X3ZB9CY: The next big card

Ash might be even bigger than caprice. Ash is only 2 influence for blue sun and is a more reliable defensive card. Ash’s weakness is that you have to be ahead economically of the runner in order for it to protect the agenda, and that it gets trashed at the end of the run anyway, unlike Caprice. Still, ash is a strong win condition. One significant weakness of the card though is that it is weak to repeated runs on the same server, so the server has to be taxing enough that one run is all the runner is able to afford. One also has to have more economy than the runner does in order to make it impossible to defeat, but despite these weaknesses Ash has the huge strength of 2 influence pips for blue sun. In Jinteki and HB though one can expect to face off against both Ash and Caprice in the same deck. Blue sun could play a mix of say 1 Caprice 2 Ash, or maybe 1 Ash 2 Caprice if one stretches their influence thin and only plays 1 Lotus Field. While HB can go 3 Ash 2 Caprice or the full 3 caprice 3 Ash.

Tollbooth, Heimdal 2.0, Tsurugi, Wall of thorns, Curtain wall and other large pieces of ice all have their home now. With a new emphasis on building large towers of ICE in very taxing servers protected by upgrades, large ICE defends the server at a quite efficient rate. compare the cost of the server of Tollbooth, Tsurugi (15 credits) to the cost of the server Architect, Eli 1.0 and Lotus Field (also 15), A rig of Gordian Blade/Mimic/Corroder breaks the 2 ICE server for 11 credits, while the 3 ICE server only costs 9 credits. The marginal cost of putting on the next piece of ice is also lower for the 2 ICE tower than the second. The large ICE controls the gameflow well, while still being very taxing to fight, one does have to be careful about not being able to defend early game, but in the midgame and beyond their defense is the key to survival and ultimately winning.

Scorched Earth is still a good backdoor way to win a game of Netrunner. The problem Scorched earth faces now is that I’ve Had Worse has been printed and the best Scorched Deck (NEH scorched) is going down the path of dead decks. This leaves us with Weyland to play Scorched Earth with. Sadly Scorched sucks unless you can back it up with a score 7 points gameplan, (something that weyland is lacking in on its own). A very well optimized Blue Sun scorched deck COULD do well but I wouldn’t put much money on it.

The most underrated card in Netrunner, Aggressive Secretary basically wrecks face when the runner accesses it. Often getting one double advanced Agg sec to hit the opponent ends the game right then and there. Blue Sun plays it best, since you can bounce any failed Aggressive Secretary to reset the mindgame, making it much easier to pull off successfully. Some version of supermodernism with 0 Scorched Earth and Aggressive Secretary instead would be the way to go in this sort of deck.

How to Prepare as Runner

As runners we have to be prepared to make multiple runs into large, heavily taxing servers in order to fight Caprice and Ash, and one card in netrunner does that better than any other card. 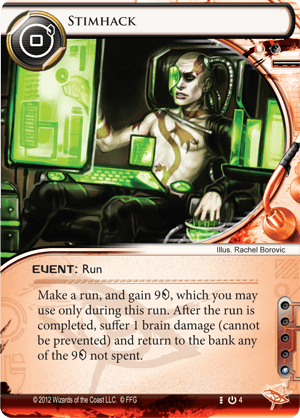 With Stimhack we can make the run on the Ash server, trash the Ash, and Stimhack back into the server to score the agenda. Stimhack allows us to make multiple runs on the same server in the same turn and pay in full each time. Best of all, Stimhack is only 1 influence, making it cheap and efficient to splash in every deck. We also must be prepared to fight for credit differential relative to the corp, fighting large ICE and stay ahead economically for that we have a trio of blue all-stars

Hi, i’m so broken that you play same old thing to get more copies of me in your deck. Account Siphon is a great way to fight a remote-based opponent, as they have often unrezzed ICE in the remote to defend an agenda. If you siphon them, they can either (A) go broke and not be able to score their agenda AND not be able to rez additional ICE on the remote, or (B) face a 15 credit swing. Neither of these 2 propositions are appealing to Glacier opponents, especially given how the score swing of 4 points can easily decide the game right then and there. Floating the tags isn’t always optimal for the criminal player given their deck and board state, and can cost you long run economy, but on critical turns the ability to Siphon someone to make money or denying credits is huge.

Want to know what’s even better than Siphoning someone to low credit totals? Using Emergency Shutdown on ice that they aren’t able to afford to rez again this turn. Siphon and Shutdown together lead to some great plays on remotes which otherwise wouldn’t be possible, Emergency Shutdown really starts to hit its stride when you are shutting down a piece of ICE that costs 5 or more, and as glacier decks often play 8 even 14 cost pieces of ICE, they are easy pickings for Emergency Shutdown spam. Shutdown Tollbooth once, then do it again and again, Getting into HQ is the issue with Shutdown but once you get there, the rewards are huge.

When the Tollbooth and Curtain Walls of the world get you down, Femme is there to prop you right back up. Glacier games are often about fake scoring windows, and Femme does a great job at making what looked like a scoring window actually fake. Femme also fights annoying ICE that plagues central servers like Heimdall 2.0 and Komainu.

This isn’t any one card, but more a class of cards; Daily casts, Aesop’s pawnshop, Kati Jones, Cyberfeeder, and Magnum Opus among others. Slow economic engines will make a remarkable return with the new glacier overlords, while burst speed based engines should see a minor decline. The stealth suite is a perfect example of a slow economic engine; Stealth breakers take a long time to set up, but once established they dominate the game.

So, what do you think of ussgordon captain’s assessment? Agree or disagree, let us know in the forums below.