The Mathematics of Kati Jones

Kati Jones is an incredibly hard card to analyze.  On one hand, she seems like she can give you a LOT of credits.  On the other hand, you don’t get the money for a while, she is only usable once a turn, and she might get blown up before you get your money, if the corp can land a tag. 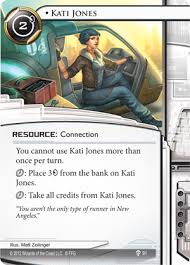 So lets try to analyze her mathematically, and see if she is worth it.

The card that best compares to Kati Jones is Armitage Codebusting.  Before we compare the two, let me just note that Armitage Codebusting is a fine card.  There are plenty of decks that use Armitage and they might even wish they could have Armitage #4-6.  So if Kati proves to be roughly equal to Armitage, then she is a fine card as well.  If she proves to be better, then she is really great. 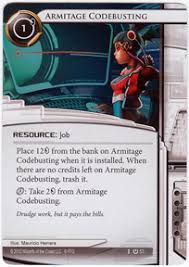 Used in it most efficient way, you will: Play Armitage for $1, spend 5 clicks taking $10 off it, and pawnshop it for $3.

The net result of this transaction is: Card + 6 clicks = $12.  You can take these clicks as fast as you want.

Let’s look at Kati Jones, used in the most similar way:

So looked at this way, Kati is a like an Armitage.  You had to wait for the money, and you had to do it over time, but you got +$1.  That doesn’t look like sufficient compensation for waiting for out money and taking additional risk.  But we didn’t exactly use Kati in the most efficient way.  We pawned her immediately after one cycle of use.

A more accurate picture is to compare Kati to TWO Armitage campaigns!

Now we are talking!  We have saved one card, one click, and provided +$1, over two Armitages.  This entire process took place over 10 turns, which is probably a realistic amount of time for an early Kati to have.  Certainly, drawing, playing, and using two Armitage Codebustings takes a while too.

So we have found that, if we put $12 on Kati at a time and then remove it, she is a fair bit more efficient than a pair or Armitage campaigns.   It’s also nice that she never dies and can keep going if the game goes long, and that she can work as additional Armitage copies in our deck, to ensure that we get one.  However, the money is backloaded and riskier.

Now let’s look at what happens when we can’t wait for $12 with Kati.  Maybe it’s too risky, maybe we need the money to develop or run now.

Let’s say we instead play Kati with a possibly more reasonable cycle of:

In the end, Kati Jones is similar to a couple Armitage campaigns, slightly more efficient, riskier, and with more delayed payout than the Armitage.   She works best if she is one piece of your income, so that you can subsist without taking her money quickly, and let it build up for greater efficiency.  It’s also important that she is only part of your income stream, because

Kati can replace Armitage or function as extra Armitage copies in your deck.  In fact, if you have an Armitage and a Kati running side by side, you might be able to store up a large amount on Kati and improve her efficiency (against some corp without surprise tag potential at least).

She shines in a longer game, where your Armitage would run out but she lives on.  She works well with some limited burst economy up front, so that you can afford to wait a while for her money to come in.

Her biggest use is in a deck that would like to play more than 3 Armitage campaigns, and/or have Armitage campaigns throughout the entire game.  At best, she provides modest efficiency gains over using Armitages, so she isn’t somehow game breaking.  But she can add more redundancy to your economy, helping to ensure that you are never stuck without money sources.

Kati vs. Armitage without Pawnshop:

Time to change the math.  Before, we assumed that a Pawnshop was available.  But maybe you’re not playing it, how do things change?

With Pawnshop: Kati is slightly more efficient than Armitages, but with money delayed and risk taken.  Potentially Valuable as extra Armitage copies to ensure you have something, or in a deck with decent temporary money sources, to help tide you over so you can use her very efficiently.

Without Pawnshop: Kati is way more efficient than Armitages, but with money delayed and risk taken.  Almost certainly better than Armitage in these decks, UNLESS you are willingly taking tags and not removing them (which can be a good strategy, especially when you have Account Siphon and Plascrete Carapace, and don’t use critical economy resources).

Kati is better the longer the game goes.  In a shorter game, or drawn midgame, she tends to end up being very similar to an Armitage, but with more backloading of the benefit.  But if the game drags on, she provides far better long term sustained economy than Armitage.

Kati is better the more time you can wait before taking her money.  If you tend to take it at $9, she ends up being barely better than Armitages over time.  At $12 she is pretty great.  At $6, she tends to lag Armitage slightly in efficiency, but at least the wait time is pretty minimal.