The Board plays… Exchange of Information!

This marks three articles in a row… and it’s not going to be the last in this chain either, but I’ll save that snippets for the outro where I usually put them. Today we are answering a lot of the questions we’ve been asked over the last few weeks in one handy dandy spot to make sure everyone is aware of the situation.

We’ve got a selection of serious questions, and then some whimsical ones that came in from the #future channel last night. Serious ones first…

The exact price is still to be calculated, but they’ll be between $30-35 with free shipping! WORLDWIDE! (no, we don’t ship to the moon)

Online only, at least for now.

Our amazingly talented graphic design team have made NISEI specific card backs which we hope to show off very soon… watch this space.

This is currently in discussion, we’ll let you know when a decision has been made.

Not at first, but I won’t rule it out.

Not necessarily ones that are due to rotate, as there’s cards in System Core 2019 which only came out recently. The new core is designed to give the best experience to new players, not just save cards from rotation.

The majority of the next rotation batch will happen on the release of NISEI-One (that’s not an official name, I just like that name because it sounds like a spaceship) but there will be a small amount of rotation happening alongside the switch to System Core 2019.

No, that’s not been on our radar. It’d involve a re-organisation of the existing colour pies, not to mention we’d have to drop a lot of new cards for it in the short term to make the compete with the existing factions. Even a new minifaction would have to work hard to keep up with it’s siblings, and they’re not exactly smashing tournaments.

Yes! We’ll do our best to get it on there ASAP.

There’s an official Jnet rep on our super secret slack, to make this as seamless as possible.

Next year for the card previews – we don’t want to build up too much hype about it way before you get to play with them. As for the story aspect, we’ll start teasing that pretty soon. @BreakOneBarrier and I have been working out the most fun way to do it (and to give you a hint as to the format I want to drop it in, I’ve recently finished reading ‘Pattern Recogition’ by William Gibson…)

That’d be lovely, but no. We don’t have the money, and unless Bill Gates is secretly a fan, neither do we as a community.

This is also currently in discussion. If we can come up with enough stuff to give people value for their Patreon donations, then yes. The money could easily be used to pay for more art, extra prizes in kits, etc – but we don’t want to be asking for handouts and give you nothing in return. We also won’t be selling any prizes outside of the kits – if you want them, win them – and adamantly will not be doing anything that would give people an advantage at events in return for money. (do you think I emphasied that enough?)

Old FFG articles used to do weird random capitalisation of words, and the community decided it must have been the act of an enthusiastic intern who was dubbed “CAPS LOCK INTERN”. 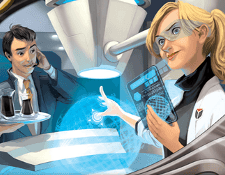 And now, for the fun questions! Some of which were aimed at the board in general, and some required specific answers from each of us… but with only so long to gather responses, I’m sorry to say CritHitD20, Zac and BreakOneBarrier didn’t have time to answer before I needed to go to press. I’ll tease the info out of them as soon as I can!

It’s on the moon.

– Prison IG (RC)
– Prison anything (shanodin)
– Shaper, ugh. (austin)
– None (jake)
– Much as there are some decks that I loathe(d), I played basically everything except 7-point CI, mostly because I couldn’t be bothered learning all the combos. (divadus)

– Younger me says MaxX, because punk clubs are fun. Older me says Lily Lockwell, because she’d have some good stories and I bet she knows all the best places. Both have excellent hair game going on. (RC)
– Maybe Ayla, cos I am a hippy at heart (shanodin)
– Bryan Stinson. I bet that guy’s a riot 😛 (austin)
– Just not Noise (jake)
– Chief Slee. She seems chill. (divadus)

– I’m a Social Timmy/Offbeat Johnny hybrid and also a Vorthos on the aesthetic scale (RC)
– We do not speak of the other game here. (shanodin)
– I don’t know, man, I just work here. (austin)
– Spike in the streets, Johnny in the (deck) sheets (jake)
– I don’t think I am named any of the above. On an unrelated note, I get a kick out of creating funky home brews, but optimizing competitive decks is also fun. (divadus)

– My son is trick or treating with his best mate, while I recover from this week of madness (RC)
– Being glad we live on the 4th floor and don’t have to deal with trick or treaters (grumpy shanodin who jumps any time the door bell goes)
– Going to a few shows and hopefully hitting up a raging party or three. (austin)
– Working. Then drinking. (Jake)
– Hanging out with family. I’m from Kiwiland – Halloween really isn’t a thing here. (divadus)

– Zero, cos they’re horrible (RC)
– RC stole my answer (shanodin)
– I dunno; marshmallows aren’t vegan. Probably like… five? Is it cheating to squish them or is that the whole point? (austin)
– I played chubby bunny once at church camp but I think I lost (jake)
– I read this question as implying that The Board is some horrific, eldritch entity with a gigantic gaping Maw and a bizarre craving for confectionery, and that made me chuckle. (divadus)

Such insights into the very core of who we are – we’re very much missing out on those 3 additional answers to each, am I right? Now, that’s all for me today so tune in again tomorrow for a preview from the Rules Guru himself, @jakodrako, about the new rules format and the work his team have been doing on it.

So if you have time in the next 24 hours, remember to…