This is a guest post from Riley Scott reporting on his first place showing at a Seattle Tournament on 8/25. Opening Moves proxies were allowed for this tournament, meaning this is the first tournament with Opening Moves legal!

I’m going to be honest; I was not prepared for this event. I had played a total of 8 games since regionals back in June, and only 3 of those were post Opening Moves. Routinely throughout the day, my opponent would play a card and my only reaction was “I think I know what that card is.” My match notes for this event are pitiful, and for this I apologize, I was rocking a wicked headache all day, and every one of my match notes are about how hard I tried to punt every round. This is not a knock on my opponents, who were all awesome people, but a reflection of the ocean of self-loathing that is me.

I think Chuck was playing Kit. Chuck is a great guy, I like him. I was very much losing this game, until I won. That’s the Weyland theme- Oh shit oh shit oh shit oh Scorched earths. He did lay down a plascrete, which I liked. Good man, Chuck, I like the cut of your jib. Unfortunately he ended a turn with 3 cards in hand, after stealing some shitty Weyland agenda from HQ. Next turn I asked him how many credits he had, and his response was “Here it comes”. Midseason, Scorched, Scorched. I ain’t even proud. Game 2- Gabe/NBN
This is when I started trying to punt, real hard. I actually discarded my only Decoder at end of turn. Against an NBN deck. I am Chris Kluwe. This game was bad, I was actually considering installing a Femme just to deal with an enigma. Then I drew into a Crypsis, having completely forgotten Crypsis was in the deck, and ran. A lot.

I believe this was my only honest win of the day, and it was on the back of Swarm. The only note on my phone regarding this match says “Swarm doesn’t end the run?”. I will go into my general lack of tactics or foresight with this deck later, but man, Swarm as the innermost piece of ice might be a bad idea, especially late game.
Game 1- Criminal: 6/Weyland: punched a sick child

Game 2- Jinteki/Gabe
Jinteki is probably one of my favorite factions; they have so many tricks and sleight of hand maneuvers that present the runner with a lot of difficult choices. The problem is, if the runner doesn’t actually want to buy into your shell game, there’s not a lot a Jinteki player can do about it, outside of Ronin. Even then, Gabe is a further dick punch by being able to bankrupt the corp, and check every remote basically risk free. That’s what happened this game, I dick punched my opponent.

This is the first time I’ve actually tied in Netrunner, it was interesting, to say the least. The only notable thing about the wanton destruction my opponent brought to the table this game was when I trashed ice for the discount, and left chum as the innermost ice on HQ. I’m a real good net runner person. 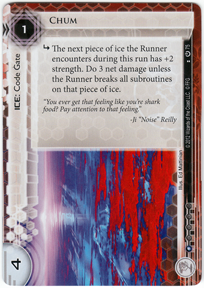 This was the first time I actually stopped playing like an asshole, and pulled my shit together. I don’t have anything specific for this game.

Game 2: NBN: 2/ Gabe: That guy who brings a grocery bag full of money to a strip club

I actually lost my notes after round 3, so I don’t really have details regarding this game, but I do remember winning a flatline because I managed to burn plascrete counters with Private Security Force. This actually happened a couple of times throughout the day, so I thought I would take a moment to talk about plascrete and meat damage.

Plascrete is a great card, but it’s nowhere near a hard counter to tag and bag. Two plascretes comes close, but you’re not out of the woods. If you have a single plascrete on the board, don’t end your turn with less than 4 cards in hand. If you are tagged, and Weyland has a PSF in their scoring area, Have 5 cards in hand, always. This is not optional.

Also, be aware that plascrete is a finite resource, The grip is not. The correct play to meat damage is to discard down to zero, and save the plascrete for when you really need it. I think successful counter play to Weyland is based around giving the corp credit for every unknown in the field of play. This might be true for all corporations, but I think it shines when applied to Weyland.

Does the corp have agendas in their scoring area? Then assume every facedown ice is Archer.
Am I tagged, or am I about to steal an agenda? Then assume my hand is 2 scorched and a Midseason.

I should have won zero of my games this weekend, instead I won four, this is why. I didn’t out play my opponent’s runner decks, I just out Weyland’d my opponents.

Game 1- Shaper:?/Weyland: that guy who drives on the side of the road during traffic jams. 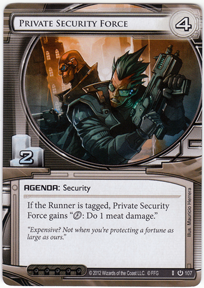 Round 5/6 – Both of these matches have been written up better in these articles: here, and here.

My only note is that on the final game of Round 6, Ben Midseasoned, landing me with 12 tags that I had spent the entirety of the game avoiding. I countered by account siphoning him twice on my next turn, and then running through his Data Raven servers like there was no tomorrow. I ended with 26 tags. Personal best.

Also, Ben I am sorry that I just made explosion sounds when I Scorched you out, that was really dickish, but intentional.

Here are some lists:

Right out the gate. I do not think this list is great. I was initially going to take this to regionals, but we spent so much time testing fast advance – and general concerns about the decks speed- lead me to shelve it. Jump forward to this week, and the only thing I have is this pile of crap you see above you, and a theoretical Jinteki deck that I neglected to put Hedge Funds into.

So I yanked some stuff out, and added a few C&C cards, 2 Jacksons, and a Swarm. My assumption was that I was going to win all my Gabe games, and I would sleaze enough corp wins in to make the cut. Weyland ended up winning 4 of its 6 games (I think), and 3 of those were flatline victories.

Swam actually put in some work. I’m pretty happy with it. The inclusion was based on an assumption that the Nationals winning Atman deck was going to be prevalent, and I really don’t want to get Eschered. Jackson Howard is just good and his existence in Asset-less Weyland is pretty bastardly. That being said I did not utilize him very well at all. Tag and Bag has a Plan A, and a Plan B.

Plan A is to blow up your apartment, twice.
Plan B is to grudgingly agree to play an actual fair game of net runner where the coropration scores 7 points.

I thought Jackson was a wholesale excuse to ignore plan B, and just dig straight to a kill. Jackson is not this. Do not make the same mistakes I did.

Successful Demonstration is a weird card. Oversight AI and general expectations around Weyland meant that the runner was rarely running on chance, instead opting to stock up on dollars, or rely on Femme to get to a server. In cases like these, it’s a blank card. I think it’s the first potential cut when it comes time to edit this thing. Corp MVP goes to Private Security Force, and my opponents general unfamiliarity with Sleazy win conditions. If I recall correctly. Every single one of my Flat line wins came through when my opponent had a plascrete on the board.

I think Geothermal Fracking goes into this deck, but Weyland’s agenda situation is pretty bad, so I have no idea how that would work.

Here’s Gabe, no one will be surprised by it.

This essentially the same deck my team took to Regionals back in June. A fun fact: This list took 1st and 2nd in Seattle, and 3rd and 4th in Portland. I didn’t realize I had a bank job in the list, as I had thought to replace them with Gorman’s beforehand. It was a dead card the entire tournament. Gorman, however, is a motherfucker. It’s a hard counter to the post bank job closed accounts, and in effect makes the crop pay you to make dollars. Oh my god. Card is nuts.

Emergency Shutdown has gone from MVP to necessary evil in my mind. The Seattle Meta has largely shifted away from big scary ice in favor of more porous and taxing servers. Shutdown is still vital for securing a route to a central, but most of the time it sat in my hand, useless. I think it stays in because of its ability to shut down annoying ice – it did really well when played against me –as well as being a general method of taxing the corp. I’m mad about it though.

I would like to thank the Card Kingdom crew and Andrew Veen for hosting a flawless tournament. The OP rules for FFG are not the best, and given the recent ‘preview’ release of Opening Moves at Gencon , I feel like everything was handled excellently. Also thanks to every person I played at the event, for not punching me in the head.