Dyper – An Introductory Text (By Rotage)

(Editor’s Note: This article was submitted by David Saiya [@rotage])

For some of you the mere mention of the word Dyper will get your pulse racing, blood boiling, and the urge to hit your head against the wall will become almost impossible to resist. Others will be asking “Why would what a baby wears cause such anger in someone?” If you are in the latter category then all will be explained. However even if you are in the former category don’t despair. This article will not only explain Dyper but will also help you combat it and hopefully triumph against it.

If you are lazy or short of time then just skip the remainder of this article and read the last sentence.

So what is Dyper? Put simply it is a Shaper deck which utilizes a lot of clicks on one turn thanks to Hyperdriver and Leprechaun (to host the Hyperdrivers). With all these clicks the plan is to Keyhole the Corporation as many times as possible and in the process trash seven points worth of agendas to win the game. But, I hear you ask, how can you run that many times and keep breaking the R&D Ice without running out of money? Well, that is where the combo of DDOS and False Echo comes in.

When you use the trash ability of DDOS it prevents the Corp from rezzing the outermost piece of Ice on any server; this would work fine for Dyper’s plan except that the Corp can (and often will) install more than one piece of Ice on R&D. So for this plan to work we need a way to stop them rezzing the additional Ice on R&D. At this point we thank an older card called False Echo which had not seen much play until DDOS emerged onto the scene. When False Echo bounces the outermost Ice, DDOS remains in effect on the next Ice in line, with multiple False Echos and Clone Chips installed you can bounce up to six pieces of Ice from R&D to the Corp’s HQ, meaning they need a tall order of eight pieces of Ice on R&D to stop you.

The core of the deck is always the same. It will be played in Shaper as it needs Hyperdrivers as well as the memory to install them, and Shapers can have both of these influence-free. Leprechaun can host two programs and ignore their MU cost, so the 1MU of Leprechaun can host up to 6MU of programs which is excellent value. However there are other variants of Dyper and these are discussed below.

This is my first Dyper deck, which I played from September 2015 to November 2015.

(Note: This deck was pre-MWL and is no longer legal. If you wanted to run it for nostalgia reasons then I would suggest dropping the Eden Shard and DDOS)

The deck used a combination of Medium and Demolition Run to access multiple cards in R&D. It had some major weaknesses, primarily Cyberdex Virus Suite which was a very common card at the time. This caused the deck to fall out of favour very quickly. However with Keyhole rotating and Medium being a Core Set card, a variation on this may appear post-rotation.

This is the most common type of Dyper deck and versions of it started to see play in December 2015. It still sees a lot of play today.

This version uses Keyhole either on its own or in combination of Medium or, more commonly, Turning Wheel. The Atman is to be used if Ice becomes rezzed, and can be combined with Escher to move to ensure only unrezzed Ice remains on R&D. With Turning Wheel you gain counters on Keyhole runs, and if it looks like you won’t win with Keyhole alone you can use these counters to run either HQ or R&D for multiaccess, depending on where you think the agendas are.

This version of Dyper has been less common than the ‘Classic’ variant. I have played it since May 2016.

This version can use either DDOS or Apocalypse to make R&D accessible for multiple Keyhole runs. The route it will choose will depend on a combination of:

So you have sat down opposite your opponent and you are not sure if they are playing Dyper or not, these are the signs you need to look for:

There are four main approaches to beating Dyper and the strategy you will deploy will depend upon the deck you are playing. The strategies are as follows: 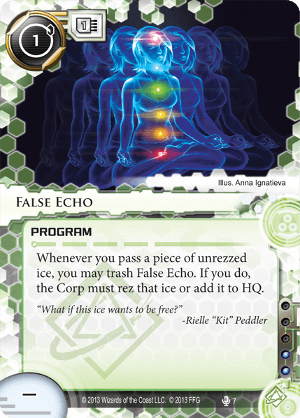 Below are specific strategies for the different corporations, these will assume standard decks.

I hope you found this article useful and that it will aid you in defeating the evil Dyper decks that are out there. With new cards constantly being released the tactics can and will change.

The quickest and easiest way to beat Dyper is to just play IG49.