(Editor’s Note: This article was submitted by John Treviranus (@Joseki))
Hey there Netrunners! 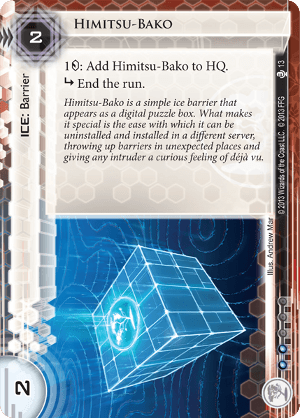 My name is John, I’m from San Francisco (Oaktown, to be more precise) and today you’ll be learning how to make your very own Hypercube.

A little backstory on how this cube came to be: after North American Champs, the San Francisco crew decided to do a cube draft. Noah had just finished in 8th place, Andrew got 9th, and I came in 12th. We were feeling great, and wanted to just drink and play even more Netrunner. We broke out the Stimhack Cube, and set off to hack some servers.

During the draft I realized I wasn’t having a remarkably great time with it, which was odd since cube drafting was one of my favorite past times in Magic: The Gathering. I feel the main reason for my disappointment is that the Stimhack Cube is overall very low power level; the decks just feel like bad Netrunner decks. Clicking for credits with half my clicks, and not drawing cards due to fear of agenda flood, just isn’t my cup of tea. I wanted the high-power, high-octane experience I got from Magic cube drafting.

Cube drafting in Magic is all about high powered combinations of cards that you would rarely, if ever, get to play in normal circumstances. You get to play powerful banned and restricted cards in all of your decks, and get to experience an unbounded drafting format that causes you to think about the game in a completely new way.

So I set my mind to achieving this feeling in a Netrunner cube. I work as a professional game designer, so I figured I could put my mind to it and come up with something really fun.

With those goals in mind, I built the Hypercube after a few weeks of iterating on the rules. Here is a guide on how to set up and play with the Hypercube.

Note: You can have your players bring their own sleeves rather than sleeving each individual card with a Perfect Fit, but this does increase the setup and tear down time of the draft.

Each player gets a “starter” deck with cards they may choose to play in their finished deck.
The Runner starter deck includes:

It’s usually undesirable to play with Priority Requisitions or the starter breakers. You may not have enough of these cards on hand, but most players will not be playing with them due to drafting stronger choices for their deck.

Sleeve up 3 copies of each of the following Corp cards in Perfect Fit sleeves, and then put each playset in its own Toploader.

Do the same for the following runner cards.

Have the following Corp IDs set aside:

Have the following Runner IDs set aside:

Personally, I ignore all “power level errata” on cards for the purposes of drafting. These errata include: Astroscript Pilot Program is limit 1 per deck, Museum of History is unique, and Wireless Net Pavilion is unique. You can make your own judgement on whether this fits your playgroup.

I do typically obey cards that were printed originally with “Limit 1 per deck,” but you can elect not to. Playing with three copies of Philotic Entanglement or three copies of 15 Minutes is pretty damn overpowered, but also a very unique experience and bound to create some interesting games.

Once the draft is completed, build your decks and play! Randomize who each player will play against using a randomization method of your choice. Since we randomly seat players at the start of the draft in our playgroup, we usually just have players play whoever is across from them at the table. After players have played a round, you can choose to pair players based on their win record, or just have everyone play a new random opponent.

While drafting, stay open to the idea of crazy combinations you would normally never get to play with. It took our playgroup a while before we realized that without influence getting in the way, fringe strategies from standard Netrunner decks can become powerhouses in the Hypercube format. Imagine how powerful your Mutate deck could be if you could spend infinite influence however you wanted!

Some examples of crazy decks we’ve drafted include:

I hope everyone has a good time with this cube, it’s totally changed how I think about the game, and the kinds of possibilities that exist within the Netrunner cardpool. It has definitely gotten a lot of local Bay Area players excited to play. If anyone has any questions about it, you can find me @Joseki on the Stimhack Slack channel. I’ll have the cube with me at Worlds 2016 this year as well, so ask me about getting in on a draft.